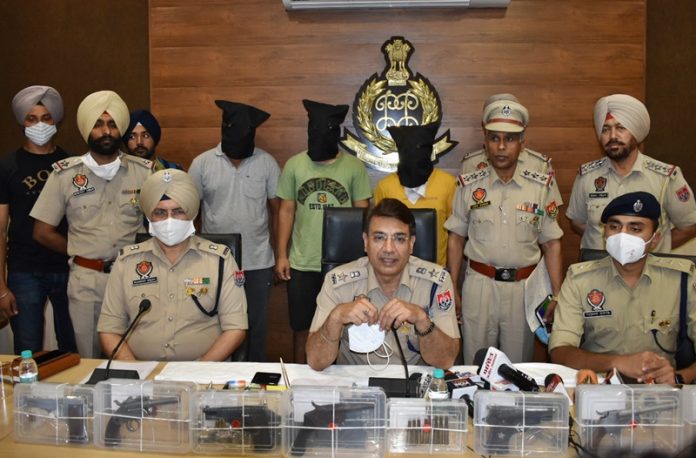 Hoshiarpur, May 31 (Report-Harpal Ladda/JatinderPrince):  A notorious gangster of Doaba and Malwa area along with two accomplices has been arrested from Uttar Pradesh’s Tilhar city and a huge cache of weapons and ammunition seized from them by the local police in its weeks’ long investigation and three-day special operation.

The accused have been identified as Gurjinder Singh alias Sonu Ror Majaria, who is an ‘A’ category gangster, wanted in several criminal cases, Yogesh Kumar of Darapur and Gurjit Singh of Tayii village in Uttar Pradesh. The Police have also recovered seven illegal pistols and 18 live cartridges from them.

Disclosing further details, Senior Superintendent of Police (SSP) Navjot Singh Mahal said that Sonu was a close associate of notorious and infamous gangster Preet Sekhon . They both met in Kapurthala Jail and killed  Dharminder Singh of Kunail village in Garhshankar and Jagga Bouncer at Amritsar.

Mahal said based on a tip-off, technical and weeks-long probe headed by SP PBI Mandeep Singh, ASP Garhshankar Tushar Gupta, and CIA Staff head inspector Shiv Kumar managed to apprehend Sonu and both accomplices from Uttar Pradesh where the team conducted three days’ special operation. He told that Sonu Ror Majara was mostly active in the Doaba and Malwa region of the State. He has been facing five cases in Garhshankar and one in Amritsar. The gangster was also involved in a recent attack at Kukkar Majra’s fuel station and Garhi Matto firing incident.

He said that a case was registered against them and a five day teams had been procured from a Garhshankar Court.