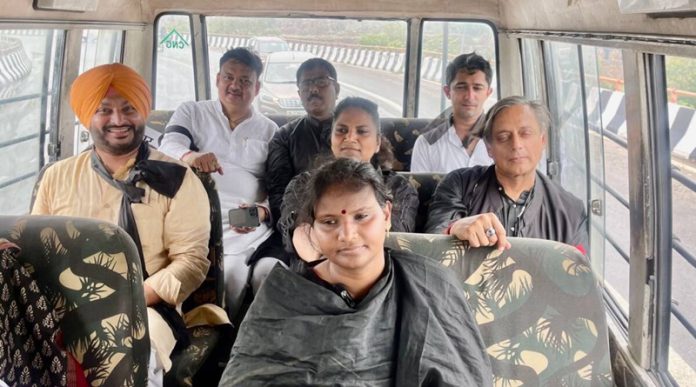 Delhi (The Stellar News): Congress party leaders began their protest march from Parliament to Rashtrapati Bhavan on Friday in opposition to issues with inflation, unemployment, and the GST on food items. All Congress MPs will march to Rashtrapati Bhavan tomorrow to raise the issues of price rise and inflation, according to Congress MP Digvijaya Singh, despite the Delhi Police sending the party a letter on Wednesday denying permission for the march.

Section 144 has been implemented throughout New Delhi, with the exception of Jantar Mantar, as senior party leaders prepare to encircle Prime Minister Narendra Modi’s residence as part of their protest, according to police authorities.

Rahul Gandhi stated during a press conference that India was no longer a democracy but rather a dictatorship ruled by four people. This was in advance of the Congress party’s nationwide protest against unemployment and price increases. The leaders of the Congress party declared that “democracy is dying” in India. “Watch as what India has constructed brick by brick since it began nearly a century ago is demolished. Anyone who opposes the idea of the coming of a dictatorship is brutally attacked, imprisoned, incarcerated, and beaten up. Rahul Gandhi made fun of the BJP administration by claiming that Hitler had also achieved electoral success. “How did he do it back then? He was in charge of all the institutions in Germany. I’ll show you how elections are won when you give me the complete system, he said.

Ajay Maken, the general secretary of the Congress, revealed at a press conference on Wednesday that the party has received a letter from the Delhi Police denying permission for a protest and a march to the Prime Minister’s house and Rashtrapati Bhavan. “Last week, the AICC sent a circular stating its intention to stage a statewide protest on August 5 in response to the issues of inflation, unemployment, and an increase in the GST rate on food goods. According to the plan, Congress leaders would hold a protest outside the Prime Minister’s residence while MPs would march to Rashtrapati Bhavan. We received a letter from the DCP today stating that we are unable to have any protest on August 5,” Maken stated.

In the capital cities across India, the state units would organise marches to Raj Bhavans in which MLAs, MLCs, former MPs and senior leaders will also take part