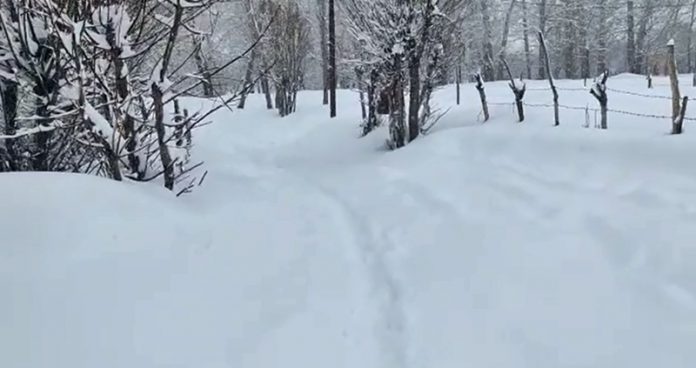 Kargil (The Stellar News), Report: Yogeshwar: In Kargil Ladakh, continuous snowfall has been observed since early morning and is the most sought and heaviest snowfall of the season and is still continue. This fresh snowfall has delayed the proposed opening of Strategic NH 1D Connecting Srinagar with Leh via Kargil further, as more than 1 feet snowfall has been recorded at Menamarg and Drass. The road was scheduled to open on 28th of February as this year there was no heavy snowfall during the winter which eased the Snow Clearance on the road.

Its pertinent to mention here that Drass records more than 5 feet snowfall during the winter but this year its only 3 feet and rest of Kargil also didn’t received snowfall which will adversely affect the summer season. According to Mohammad Amin Polo, people were eagerly waiting for the Snowfall as it will add on the glaciers and help in forming new glaciers as well as they are proposing to organize a Ski Course in Drass and on such snowfall it will be a great advantage.

Dr. Mehdi Akhone Principal Scientist KVK Kargil has predicted Pest attacks on Fruit as well as other trees during summer due to the relatively warmer Winter, which will affect the business of the farmers. Its pertinent to mention here that Kargil has been Receiving less snowfall as compared to 20 years back which has resulted in drying of Various Springs on which the maximum number of Irrigation System is Dependent. Metrological department has predicted Snowfall till 28th February.