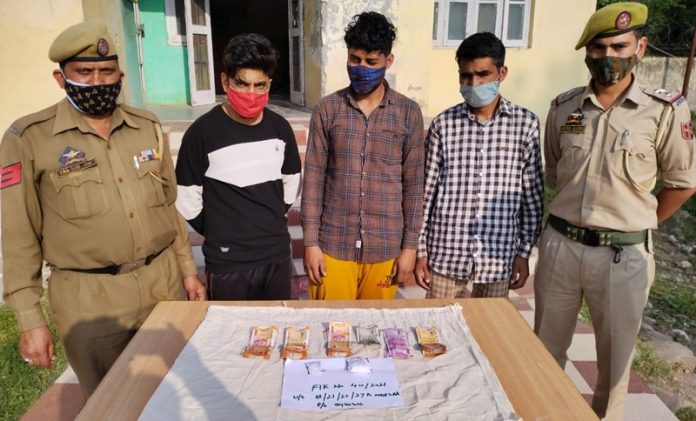 J&K/POONCH (Anil Bhardwaj): A Joint naka of police party headed by SHO Gursai Inspr Niaz Ahmed along with Team of CID CI and 49RR was established at Harni Naka manjari bridge under the supervision of SDPO Mendhar Z.A.Jafri-KPS During naka checking A motorcycle bearing registration number JK12B/4873 Pulser came from Nakamanjari which was signaled to stop for checking but motor cycle rider alongwith two othes were tried to escape.

Alert police party apprehended them and during thier personal search recovered 20 grams of narcotics (Heroin like substance) and a cash of amount rupees 31500( thirty one thousands five hundred only ) from their posession. The arrested persons were identified
01.Ayaz ahmed @Manto S/o Ghulam Server R/o Ari
02.Vivek Sharma S/o peveen kumar R/o Ari and
03.Javaid Iqbal S/o Talib Hussain R/o Dheri Dabsi
awho were engaged in Narcotic dealings .In this regard FIR no.40/2021 U/S 8/21/22/27A NDPS in P/S Gursai has been registered and further investigation is going on.

Public of the area appreciated the role of J&K Police in Distt Poonch Under the dynamic leadership of District SSP Poonch Dr Vinod Kumar -IPS in eradication of menace of narcotics from society .
District police Poonch appealed general public to beware of such type of drug peddlers and if have any information about such activities ,inform Police for quick action to eradicate narcotic menace which spoils the life of future generation