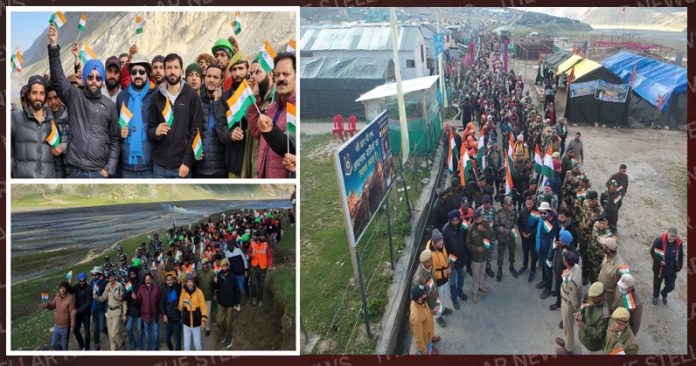 J&K/Panchtarni (The Stellar News, Anil Bharadwaj): As part of the ongoing ‘Har Ghar Tiranga’ campaign, a massive Tiranga Rally with a participation of about 3000 people was held today at a height of more than 12,000 feet at Panchtarni Base Camp, exuding an environment of nationalist and patriotic fervour.

The rally was jointly held by civil and security agencies, approx. 1000 Shri Amarnathji yatris, Sanitation Workers, and other stakeholders to commemorate 75 years of a progressive and India and celebrate ‘Azadi ka Amrit Mahotsav.’

The rally was flagged off and led by Thakur Sher Singh JKAS, Camp Director Panchtarni. Enthusiastically waving the national flag, the participants covered the whole tented city of Panchtarni and the route to the holy cave of Shri Amarnathji.

They also hoisted flags on the tents in the camp while raising slogans of Vande Matram and Bharat Mata Ki Jai, urging the citizens to hoist or display it in their homes from 13th to 15th August, 2022.

The objective of the rally was to spread awareness regarding ‘Har Ghar Tiranga’ initiative of the Government of India that aims to inspire every Indian to hoist the National Flag at their home and to invoke the feeling of patriotism in the hearts of the citizen and promote awareness about our National Flag.

Bullets fired after a scuffle between soldiers, 2 died, 2 wounded

Charge-sheet being filed in acid attack case in 4-5 days: SSP...