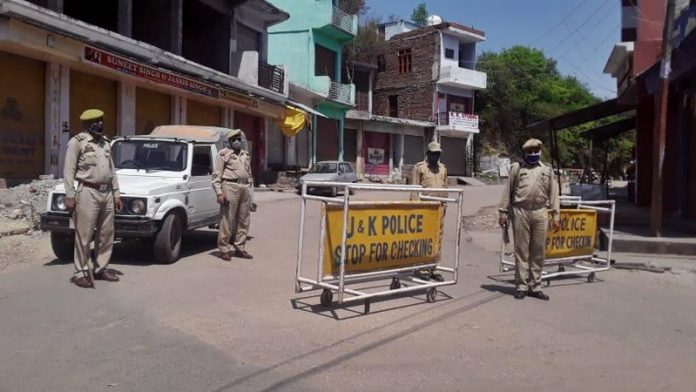 J&K/Rajouri (The Stellar News), 1 May, Anil Bhardwaj: In order to act tough against violators of lockdown and restrictions imposed amid sharp rise in number of Corona Virus cases, Jammu and Kashmir police in Rajouri district registered dozens of cases against violators with majority of whom were found running their business establishments in brazen violation of SOPs related to lockdown that started on Friday evening and will end on Monday morning.

Police in an official statement said that entire Rajouri district remained under restrictions and lockdown with people in all the areas extended their best cooperation and remained indoors with only movement witnessed was of employees from essential services and people of medical emergencies.

However, police said, a few people were caught on the wrong foot as they were violating COVID19 SOPs after which necessary legal action as per law has been taken against the accused.

Police said that a team headed by Incharge Police Post Teryath was on patrolling in Teryath when a man Ramesh Chandra and a contractor Surjeet Singh found carrying out lanter level construction of shops with forty five to fifty laborers were found working at the site. Taking note of this grave violation, police have taken cognizance of the matter for further legal action against the accused whereas said police team also intercepted a Tata Mobile JK11E 6673 at Moughla which was found ferrying passengers after which driver of the vehicle Mohammad Zuber has been booked with further legal action has been taken.

Similarly, a police team headed by SHO Rajouri intercepted a number of vehicles plying illegally on road in violation of lockdown whereas few traders were also found running their business establishments after which eight cases against equal number of accused have been registered in police station Rajouri.

On the other hand, police team headed by SHO Dharamsal intercepted two tippers with numbers JK11D 4705 and JK11E 6657 and both vehicles were found loaded with construction material and plying on road illegally. Police seized both the vehicles and their drivers namely Mohammad Zaffar resident of Kalakote and Vijay Kumar resident of Kalideh Sunderbani have been arrested.

Similar actions were taken in jurisdiction of PS Kalakote, Darhan, Kandi and Thanamandi against violators of COVID SOPs.

Police said that 27 FIRs have been registered against violators of lockdown today and further legal proceedings are also going on.

Police further informed to have tightened noose against people found roaming in market without face masks with a total of 3,48,770 rupees of fine has been imposed against violators since April 1st, 2021, while many business establishments have also been sealed as per procedure established by law.

Lt Governor announces a slew of measures for Families, who lost their loved ones to Covid-19 pandemic