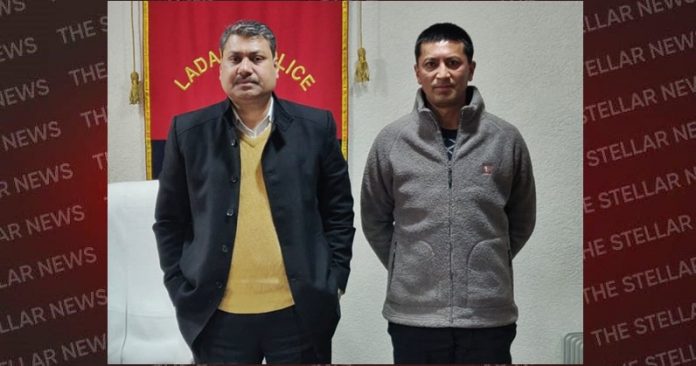 Ladhakh (The Stellar News), Report: Yogeshwar: Secretary District Kargil Olympic Association Syed Mehraj ud Shah called upon the Additional Director General of Police Ladakh, Statish Khandare and briefed him about the various sports activities going in Kargil Ladakh. Syed Mehraj Ud Din Shah also raised some important demands before the ADGP and said that There was a Reservation policy for all the outstanding sports persons in J&K Police, and requested to continue the same in Ladakh Police also so that more and more youths seek employment opportunity in the field of Sports.

Referring to the All-India Police Games to be conducted by the All-India Police Sports Control Board is soon, He requested to frame Ladakh Police Teams in the events which are played in Ladakh so that athletes from Ladakh who are already in Police Force get opportunity to represent Ladakh at National Level. Syed Mehraj request Ladakh Police to organize Ladakh games alternately in both Districts so that the talent at the grassroots levels gets proper platform and further requested to provide District Kargil Olympic Association with multipurpose mat which can be used for many games.

ADGP Satish Khandare while refering to various developments already going on for development of Ladakh Police Sports Policy said that Ladakh police is focused on development of Sports and to provide Sportspersons a better and secure future.
He assured all possible help from Ladakh Police to Distirct Kargil Olympic Association and assured to provide Multi Purpose Mat in the coming future. ADGP also assured to utilize the Inservice Sports person to form the first team of Ladkh Police to participate in All India Police Games.