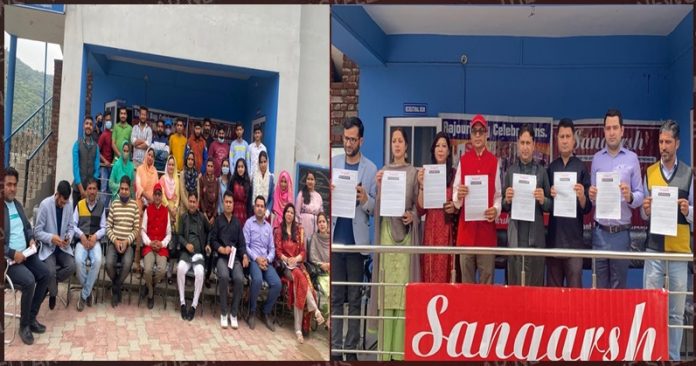 J&K/Rajouri (The Stellar News), Report: Anil Bharadwaj: Sangarsh-A civic moment for justice, equality, peace, prosperity and brotherhood, held a one day convention at Press Club, Rajouri regarding the observance of Rajouri Day 2021. Kick-starting its awareness campaign, Sangarsh Movement released a document regarding the profile of Rajouri and an article on the legacy of Recapturing of Rajouri. On this occasion, 60 delegates of the movement participated.

Sangarsh releases document on the Profile of Rajouri

Speaking during the occasion, the founder activist of the movement, Vikrant Sharma highlighted the legacy of Rajouri Day Celebrations and called upon the youth in particular and masses in general to come forward in connection with the mission towards assuming the responsibility of the district. Vikrant added that the movement has the core objective of raising issues of public concern and to work for the realisation of the programs and policies of the Government of India.

Senior Advocate Ahsan Mirza stated that Sangarsh carries the great legacy of activism since 2007 and started Rajouri Day Celebrations since 2015 and is working with full zeal and enthusiasm towards the emancipation of the masses, raising their voices in front of those at the helm of affairs.

District Youth Officer, NYK Rajouri, Nitin while releasing the document emphasised that events like these are a strong binding force for the people of the district. He applauded organisations like Sangarsh that are working in collaboration with the administration and acting as catalyst in the process of development.

Renowned Literary figure, Zakir Bhallesi while praising the efforts of Sangarsh Movement claimed that the document released shall enrich the knowledge of the people regarding the history, legacy and profile of district Rajouri. The prominent activists of Sangarsh present in the event includes Munir Mirza, Rohit Gupta, Shiv Dutta, Sonam Sharma, Madhu Sharma, Rahul Chandan, Shazima Charak, Ajay Rajput and others.