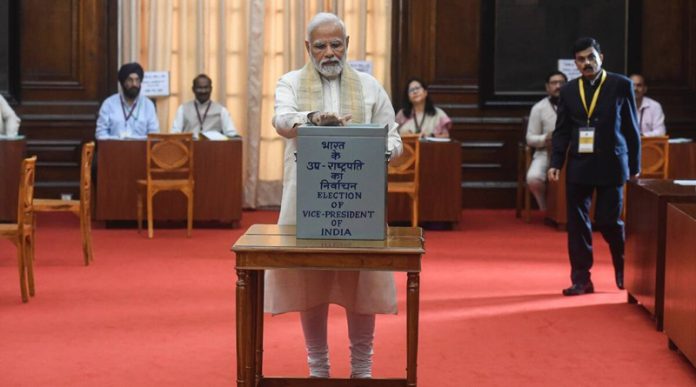 Delhi (The Stellar News): As the term of current Vice-President, M Venkaiah Naidu, ends on August 10, members of both Houses of Parliament are voting to elect the next Vice-President of India on Saturday. Polling to elect the next Vice President of India began at 10 am, with Prime Minister Modi being the first one to cast vote.

NDA’s candidate Jagdeep Dhankar will have an easy win against opposition’s candidate Margaret Alva, as Dhakar is in an advantageous position with the support of several parties like Janta Dal (United), YSRCP, BSP, AIADMK, and Shiv Sena. He is likely to get to cover over 515 votes against Margaret Alva’s speculated 200 votes.

The 80 year-old Alva is Congress veteran and has served as governor of Rajasthan, while the 71 year-old Dhankar is a Jat leader from Rajasthan with socialist background.

The polling began at 10 am and will end at 5 pm and the counting of ballots will be happened immediately after that. By late Saturday evening, the returning officer will announce the name of the next Vice President of India.

PRASHANT KISHOR SUGGESTED CONGRESS TO TARGET OF 370-400 SEATS FOR LOK...