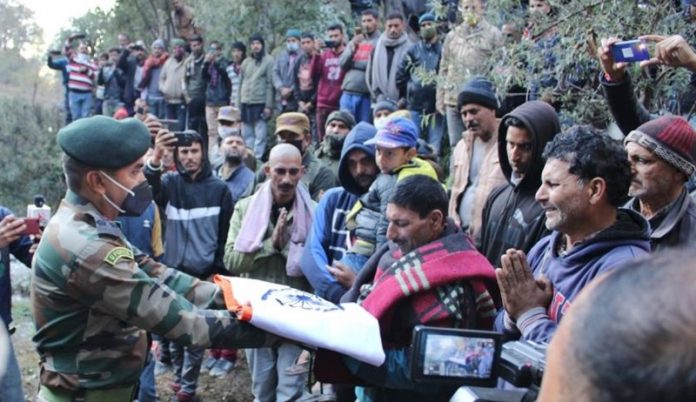 Jammu/Udhampur (The Stellar News): Army paid a befitting tribute to Late Sep Ratan Lal Singh today, who made the supreme sacrifice of his life on 26 Nov 20 in Khushipora, Srinagar. In a solemn ceremony conducted at Mahore, all ranks of Rashtriya Rifles Sector paid homage to the valiant soldier on behalf of the entire Indian Army and nation. Late Sep Ratan Lal Singh was 35 years old and had joined 163 Inf Bn TA (SIKH LI) on 18 Feb 2006. He belonged to village Sarh of Mahore Tehsil (District Reasi). While being deployed as part of a Quick Reaction Team in general area Aban Shah Chowk, HMT, Khushipora, Srinagar, he lost his life due to the indiscriminate firing by the terrorists. He is survived by his wife, two sons and a daughter.

Late Sep Ratan Lal Singh attained Veergati while fighting terrorists as a worthy Son of the Soil, displaying immense physical and mental strength in the face of enemy. He was laid to rest with full military honours. In this hour of grief, the Army salutes his sacrifice and stands in solidarity with the bereaved family.