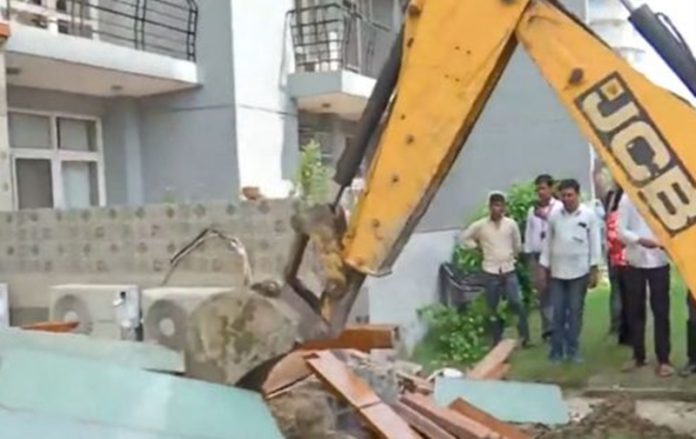 Noida (The Stellar News) Saksham Kalia: On Monday, Bulldozer action started on the premises of Shrikant Tyagi whose video just gone viral of abusing a woman outside his Noida residence, he interesting claims himself as the National executive member of the BJP’s Kisan Morcha and National co-ordinator of its Yuva Samiti, claims later denied by BJP.

The JCBs reached to Grand Omaxe in Noida’s sector 93 on Noida administration’s orders, demolished illegal construction at Tyagi’s residence at the housing complex.

While a Rs 25,000 reward has been announced for information on the absconding self-proclaimed politician, Noida Police is also reportedly coordinating with other police forces to nab him. As per available information, 12 teams have been formed to trace Shrikant Tyagi who has been on the run since the video of him abusing a woman at Noida’s Grand Omaxe society went viral. Around 50 premises have been raided so far to find him, sources said.

The Noida Police on Sunday said they have detained four close associates and impounded two vehicles of the absconding politician and also lodged another FIR against him.