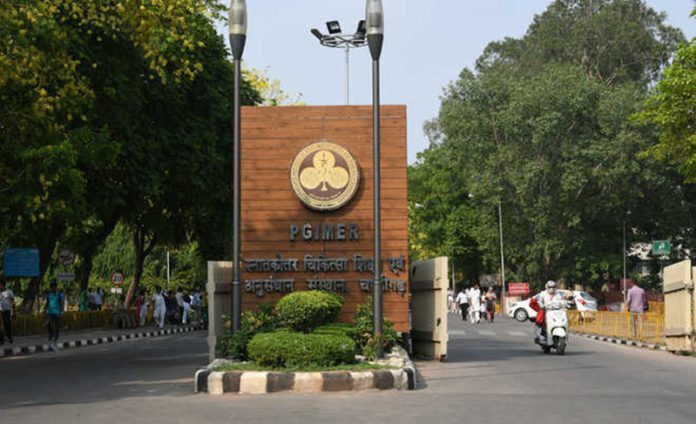 Punjab (The Stellar News): After the Punjab government failed to clear dues of seven months amounting Rs 16 crore under Ayushman Bharat Yojana, a health insurance scheme, the PGI has stopped treatment under the scheme for patients hailing from the state.

An amount of nearly Rs 16 crore in claims raised by the PGI since December 21, 2021, is lying pending with Punjab.

“The beneficiaries of Ayushman Bharat Yojana from Punjab are not eligible for benefits under the scheme from August 1 onwards. Any beneficiary seeking fresh admission will have to pay user charges like routine patients. The beneficiaries from other states will continue to avail of the services as usual,” a statement released by the PGI nodal officer for the scheme read.

PGI Deputy Director Kumar Gaurav Dhawan said, “The State Health Authority, Punjab, has been requested to clear the pending payment.” Last month, the PGI had also written to the National Health Authority, the implementing agency for the scheme, seeking its intervention so that the claims could be reimbursed.

The Government Medical College and Hospital, Sector 32, had halted the treatment of patients hailing from Punjab from March this year after the dues accumulated to Rs 2.3 crore. The Punjab Government owes over Rs 3 crore under the scheme to the GMCH, Sector 32, the GMSH, Sector 16, and private hospitals in Chandigarh.

The Principal Secretary, Health and Family Welfare, Punjab, Ajoy Sharma, said, “The PGI, along with the GMCH and the GMSH, will start getting their payments in a week’s time.”

The Ayushman Bharat Mukh Mantri Sehat Bima Yojana was launched on August 20, 2019. The scheme is designed to provide health protection by providing a financial cover to at least 65 per cent of the population of Punjab. It is an entitlement-based health insurance cover of Rs 5 lakh per family per year. Under the scheme, cashless and paperless treatment is available at government and empanelled private hospitals.