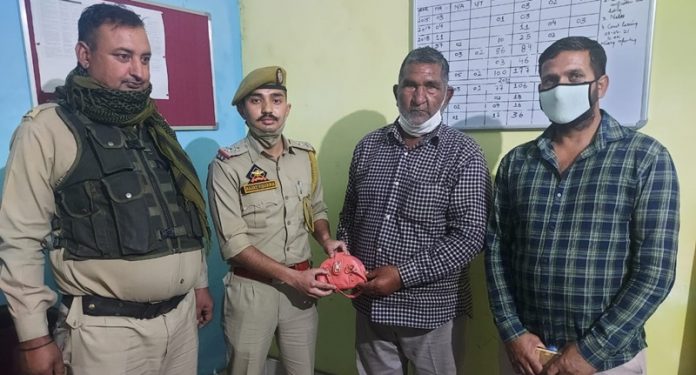 J&K/Rajouri (The Stellar News), Anil Bhardwaj: Jammu and Kashmir police in Rajouri’s Nowshera police station recovered a lost purse containing cash and ornaments of gold and silver and handed it back to its owner.

Police said that on April 06, 2021 evening, a complaint was received from a woman wherein stated that she had lost her purse somewhere in Nowshera market and that it contained a gold mangalsutra of 4 tola, a gold chain of 2 tola, 4 silver anklets and cash to the tune of nine thousand rupees having total value of approximately 3 lakhs Rupee.

Police added that immediately after receiving the complaint, a special team led by PSI Rajat Sharma under the supervision of SHO Pankaj Sharma carried out a meticulous scrutiny involving retracing route of the lady and examining CCTV footage from several places in and around the market area where the complainant had lost her purse.

During the course of enquiry, the police team was able to zero in the location where the purse had been lost Thereafter, the location was circulated among the public, appealing to come forth with any information likely to lead to the recovery of the lost purse. In response and within a short time, a good samaritan came forward and handed over the lost purse to PS Nowshera, with all contents intact. The same was handed over to the complainant.