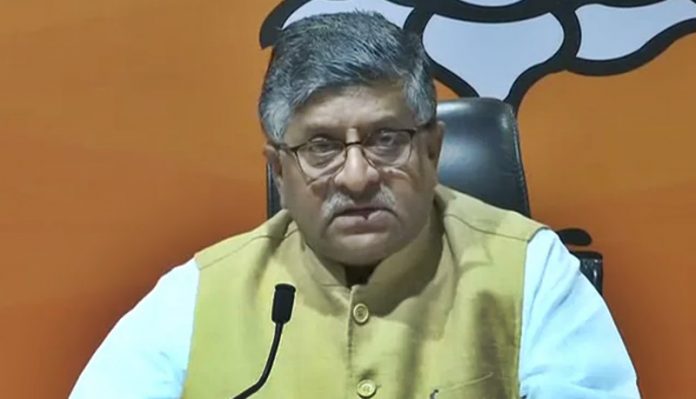 Delhi (The Stellar News): Former Union Minister Ravi Shankar Prasad said, “If people saw dictatorship, it was during emergency when people including opposition leaders and editors, were jailed, judges were superseded and censorship imposed. India Gandhi had then spoken about having a committed judiciary”. This statement was made in retaliation to Congress leader Rahul Gandhi’s “death of democracy” remark.

On Friday, BJP accused Congress leader Rahul Gandhi of blaming Indian democracy and its institutions for the Congress’ repeated electoral defeats under his leadership and the ongoing probe by the ED against him in the National Herald Case.

Ravi Shankar Prasad addressing the press shortly after Rahul Gandhi’s own presser before the Congress’ protest march from the Parliament, said that the Opposition leader has made “shameful and irresponsible” comments. “Stop demeaning the institutions of India to safeguard your corruption and misdeeds. If people don’t listen to you, why are you blaming us”, he said.

Prasad asked Gandhi as to why “blame democracy when people of India reject you with repeatedly regularity”. He also queried whether there was any internal democracy within the Congress, a party, he said that had some “good leader” but was really all about the Gandhi family.

“Rahul Gandhi had made all kind of allegations against PM Modi during the 2019 polls as well but people elected him with bigger mandate”, said Ravi Shankar.

He also said Rahul Gandhi “must answer as to how Young Indian, a firm in which the two Gandhis have 76% stake, allegedly acquired National Herald’s assets worth over Rs 5,000 crore with the investment of only Rs 5 lakh”.

“The judiciary refused to quash charges against him and others in the case, and he is now blaming institutions”, Prasad said. Rahul Gandhi will have to face consequences for what he has done, he further added.

The government under PM Modi has been taking strong measures against corruption, and the system around it, are rattled because democracy has become synonymous with financial irregularities when the party was in power, he alleged.